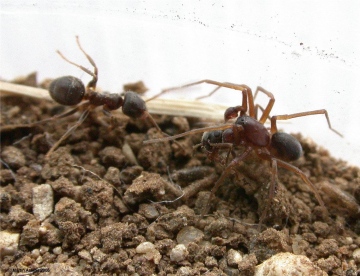 Distribution
The species was first found south of Swindon, Wiltshire in 1997. It is also found in southern France and northern Spain (Askins 1999).

Habitat and ecology
Z. fuscum has been found under stones on an embankment, under loose mortar at a brick bridge and platform, and in clinker (Askins 1999). More recently it has been found on brownfield land in Nottingham and on shingle near Cardiff in S. Wales Wales (J. Harper, pers. comm.). The species presumably needs a relatively warm habitat. In Wiltshire, it has been found in situations well exposed to the sun, where there are plenty of bare surfaces and gaps between stones, gravel, etc. which provide refuges at all the sites. It seems that females may be adult all year, males in June.

Status
The spider has been recorded in numbers from three locations since 1992; a disused railway line in Wiltshire, coastal shingle in Glamorgan, and a brownfield site in Nottingham, which has probably been lost to development

Threats
The Nottingham brownfield site has probably been lost to development and disturbance is a threat to coastal shingle habitat.

Management and conservation
At shingle sites damage from disturbance should be avoided. On other sites it is likely that open sunny habitats will need to be maintained by periodic control of scrub and tree invasion. Occasional disturbance to expose areas of bare ground is likely to be beneficial.