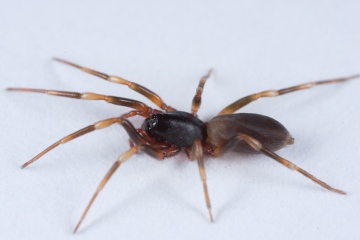 Distribution
The species is widely distributed in Britain, but it becomes more scattered in northern England, with few records for the north of Scotland. It is widespread in western and central Europe as far north as Denmark and Sweden.

Habitat and ecology
The spider is found under stones and bark, in ivy, dry litter and detritus wherever it collects such as in the bottoms of hedges, in epicormic shoots of trees, birds' nests and squirrels' drays. It has been recorded in gardens and sometimes houses. A fast moving nocturnal hunter with a rather elongated appearance, especially in the male, it spends the day in a sparse silken cell. The pink eggs are laid in batches of about 20 and guarded by the female (Bristowe 1958). Adults of both sexes can be found in every month of the year with peaks during the spring/early summer and autumn periods. Large numbers of all age groups occur together in suitable habitats.

Adult Season Data (based on 1271 records with adult season information)